I bought this book from Audible and listened to it with the Audible app on my iPhone.

I have heard about this book many times but have never read it or watched one of the movies or TV shows based on it, but I decided it was about time that I did. Written originally as a short story in 1958 and later in 1966 as a novel it is an amazing tale of a mentally challenged man who science turns into a genius with an incalculably high IQ even though he still has the emotions of a child.

As narrator Jeff Woodman brings this story to life, he does an incredible job presenting Charlie through his many changes and growth along with the people around him that I regularly forgot that only one actor was conveying the story. Not many narrators have done that for me and this performance is the best I have heard in an audio book so far.

Charlie Gordon knows that he isn’t very bright. At 32, he mops floors in a bakery and earns just enough to get by. Three evenings a week, he studies at a center for mentally challenged adults. But all of this is about to change for Charlie. As part of a daring experiment, doctors are going to perform surgery on Charlie’s brain. They hope the operation and special medication will increase his intelligence, just as it has for the laboratory mouse, Algernon. Meanwhile, each day Charlie keeps a diary of what is happening to him. This is his poignant record of the startling changes in his mind and his life.

Flowers for Algernon was first published as a short story, but soon received wide acclaim as it appeared in anthologies, as a television special, and as an award-winning motion picture, Charly. In its final, expanded form, this haunting story won the Nebula Award for the Best Novel of the Year. Through Jeff Woodman’s narration, it now becomes an unforgettable audio experience.

I rate this book a 10 out of 10 and recommend it to any adult. The story is very intense and the subject matter is inappropriate for children. I do not think I would have reacted well to this story in primary school, maybe as a senior in high school I would have been able to appreciate it, but not before.

I bought this book on Audible and listened to it using the Audible App for iPhone.

James Marsters is back and as great as ever, in my opinion he IS the voice of Harry Dresden, no other will do. His performance is great.

In his new role as the Winter Knight Harry Dresden leaves me feeling flat. I plan on listening to it again in a couple of months to see if I feel this way after a second listen and will update this review.

After being murdered by a mystery assailant, navigating his way through the realm between life and death, and being brought back to the mortal world, Harry realizes that maybe death wasn’t all that bad – because he is no longer Harry Dresden, Chicago’s only professional wizard. He is now Harry Dresden, Winter Knight to Mab, the Queen of Air and Darkness.

Of course, it won’t be an ordinary, everyday assassination. Mab wants her newest minion to pull off the impossible: kill an immortal. No problem there, right? And to make matters worse, there exists a growing threat to an unfathomable source of magic that could land Harry in the sort of trouble that will make death look like a holiday.

Beset by enemies new and old, Harry must gather his friends and allies, prevent the annihilation of countless innocents, and find a way out of his eternal subservience before his newfound powers claim the only thing he has left to call his own… his soul.

I rate this book a 6 out of 10 and consider it a must read for Harry Dresden fans. Hopefully the next book will be better. 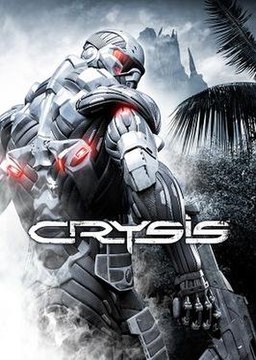 I bought a bundle of Crysis games from Steam while they were on sale and am playing them on a MacBook Pro using Bootcamp and Windows 8. It was developed by Crytek and published by Electronic Arts.

Crysis was released way back in 2007 and at the time it really punished the PC hardware that was available. It took a very solid gaming rig to play the game at anything other than its lowest settings.

I played through the single-player game of Crysis using an Apple MacBook Pro laptop with an Intel i7 2.3GHz processor, 16GB of DDR3 RAM, and an AMD Radeon HD 6750M with 1 GB of memory on Windows 8 Pro 64-bit. And even with all that hardware, unbelievable specs back in 2007, the fans on the computer ran at full speed even on the main menu screen, so it is still a punishing app.

The game played well though, I let the game automatically choose its settings which is always a nice feature, and the only time I experienced some stuttering was in the endgame when there were a lot of very large object on the screen at once.

I liked Crysis quite a bit, it only took me 11 hours of sporadic playing to make my way through the storyline, but for the most part it was a fun experience. I ran into some bugged places where I had to be very careful to avoid places where I would get stuck time and time again. Flying the “plane” was a chore for me, I didn’t like that part very much, but it was over fairly quickly.

As a straight-up first-person-shooter I liked it, but in 2012 there is nothing here I have not seen before.

Check out some screenshots I took while playing the game.

From the publisher:
Adapt to Survive — An epic story thrusts players into an ever-changing environment, forcing them to adapt their tactics and approach to conquer battlefields ranging from newly frozen jungle to zero-gravity alien environments. Suit up!

I rate this game a 7 out of 10 and recommend it as a cheep FPS fix.

I bought this book on Audible and listened to it using the Audible app on my iPhone.

John Scalzi and Wil Wheaton knock another one out of the park. I am not listening to their books in any particular order so I am not sure if they are getting better or if I am learning to enjoy the writing and performance more and more.

This is a great story with a handful of plot holes that distracted me a bit in the second half, but not so much as to ruin the book. I really enjoyed how the alien changes as his form changes, keeping some of his original personality while picking up a lot of the new forms personality. Very well played.

The space-faring Yherajk have come to Earth to meet us and to begin humanity’s first interstellar friendship. There’s just one problem: They’re hideously ugly and they smell like rotting fish. So getting humanity’s trust is a challenge. The Yherajk need someone who can help them close the deal. Enter Thomas Stein, who knows something about closing deals. He’s one of Hollywood’s hottest young agents. But although Stein may have just concluded the biggest deal of his career, it’s quite another thing to negotiate for an entire alien race. To earn his percentage this time, he’s going to need all the smarts, skills, and wits he can muster.

I rate this book a 9 out of 10 and recommend it to anyone that likes funny sci-fi.

I bought this book on Audible and listened to it on my iPhone using the Audible app.

This is the first book I have gotten lately from Audible that left me very disappointed. It is a highly rated book, but it didn’t work for me.

Paul Boehmer does a good job with Doctor Impossible’s portion of the story but Coleen Marlo comes across as flat and lifeless, just dull and a little bored.

I got really tired of hearing "origin" stories over and over again which make up the majority of the story. Maybe I just don’t like superhero stories very much and maybe this story is a stereotypical superhero story with the only twist being that it is presented in both a superhero and supervillain’s viewpoint.

Anyway, it did not work for me at all.

Over the years, he’s tried to take over the world in every way imaginable, using doomsday devices of all varieties (nuclear, thermonuclear, nanotechnological) and mass mind control. He’s traveled backwards in time to change history, forward in time to escape it. He’s commanded robot armies, insect armies, and dinosaur armies. A fungus army. An army of fish. Of rodents. Aliens. All failures. But not this time. This time it’s going to be different.

Fatale is a rookie superhero on her first day with the Champions, the world’s most famous superteam. She’s a patchwork woman of skin and chrome, a gleaming technological marvel built for the next generation of warfare. Filling the void left by a slain former member, we watch as Fatale joins a team struggling with a damaged past, having to come together in the face of unthinkable evil.

Soon I Will Be Invincible is a thrilling first novel, a fantastical adventure that gives new meaning to notions of power, glory, responsibility, and (of course) good and evil.

I rate this book a 3 out of 10 and do not recommend the audiobook.