I bought this audiobook from Audible.com.

Boy-oh-boy do I love me some Mike Resnick space bounty hunter goodness and this one does not disappoint. It is the fourth book in the Widowmaker trilogy, which is kind of stretching the bounds of the meaning of trilogy, but it has happened before and will again.

This audio book was created as a part of the Audible Frontiers program and I want to thank them from the depths of my geeky little sci-fi loving heart for creating such great productions.

The narrator Stefan Rudnicki voice requires me to turn the bass down on my car stereo so that I can clearly hear him, but his acting abilities are wonderful creating real depth and breadth to the characters that he portrays.

There is only one thing that Jefferson Nighthawk, the original Widowmaker, really wanted to do, and that was retire on a far-away planet and raise a garden. There were still two clones of him to keep the peace and carry on his legend. Unfortunately for him, his two clones have come to a disagreement. When a widowmaker takes on a widowmaker, everyone runs for cover. There is only one man who can stand up to the clones of the Widowmaker… the Widowmaker himself.

I rate this book a 9 out of 10 and a must read for all Mike Resnick fans.

I bought Trine as part of the Humble Bundle 3 and played it on a Mac using Steam.

I really enjoyed Trine, it is my favorite game from the Humble Bundle 3 package, it is the only one I have had enough interest in to play all the way through.

The game is a side scrolling fantasy game with 3 characters, a fighter, a thief, and a wizard. You use only one of the characters at a time to complete the puzzles, fight the bad guys, and make your way through the maze of world. And what a beautiful world it is.

I took a lot of screen shots, but none of them do the game justice. There is always something to look at, the static artwork is amazing and the animations are glorious. Looking at the screenshots on the Trine web site also fail capture the beauty of the world.

If you want to see a good representation of what the gameplay looks like check out some of the video in 720p on Youtube, they look great. The abilities of the players in the demo put my game skillz to shame, especially with the wizard, the idea of being able to make a plank that is falling then use it to run and jump over a gap is jaw dropping to me. After watching some of these videos I am eager to play through again trying to use some of what I saw.

From the game’s web site:

Trine is a physics-based action game where three characters allow clever solutions to challenges created by hazardous puzzles and threatening enemies. The gameplay is based on fully interactive physics – each character’s different abilities and tactics can be used to invent new ways to overcome obstacles and save the kingdom!

I rate this game a 9 out of 10, it would be a 10 out of 10 but the last level was beyond me without dropping the skill level to easy, and then it was to easy. 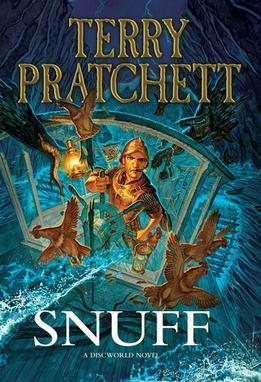 I read the hard cover version of this book purchased from Amazon.com.

The 39th book in the Discworld series of which I have read them all, most of them multiple times, and loved each and every one. In this novel we follow Commander Vimes on vacation with his wife Lady Sybil in her family’s palatial estate.

Goblin’s, river boats, tobacco, drugs, beautiful music, and a heard of others join together to create a great story as seen from Sam’s hard-boiled point of view as a policeman, as a duke, as a husband, as a father, and as a blackboard monitor.

The words chosen for the telling of this story bothered me a bit though. I do not recall any other Discworld novel having so many “four letter words”. The cussing felt unnecessary and out of place. I consciously now choose to ignore that feature of the book and substitute all of the dialog that I felt objectionable with words and phrases that I find to be more in line with the previous novels of Discworld. And so my review is for my own edited version of this book and not as it was delivered to my door.

I rate this book a 9 out of 10 and highly recommend it to any fan of Terry Pratchett’s Discworld, but this is not the book to begin with. I recommend Guards, Guards or The Color of Magic as your first. 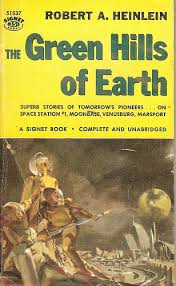 I loved listening to this book. It is a collection of short stories about working in space, on the moon, and what it is like on earth in the far future of the mid 1980’s.

With the stories written in the late 1930’s up through the late 1940’s they are very different from most of the current science fiction I read these days.

This book includes the short stories “Delilah and the Space-Rigger,” “Space-Jockey,” “The Long Watch,” “Gentlemen Be Seated,” “The Black Pits of Luna,” “It’s Great to Be Back,” “We Also Walk Dogs,” “Ordeal in Space,” “The Green Hills of Earth,” and “Logic of Empire.”

The Green Hills of Earth is a collection of science fiction short stories http://en.wikipedia.org/wiki/Short_story by Robert A. Heinlein published in 1951, although it includes short stories published as early as 1941. The stories are part of Heinlein’s Future History. The title story is the tale of an old space mariner reflecting upon his planet of birth. According to an acknowledgement at the beginning of the book, the phrase “the green hills of Earth” is derived from a C.L. Moore story.

I rate this book a 9 out of 10 and recommend it to anyone who loves science fiction and classic stories of space.